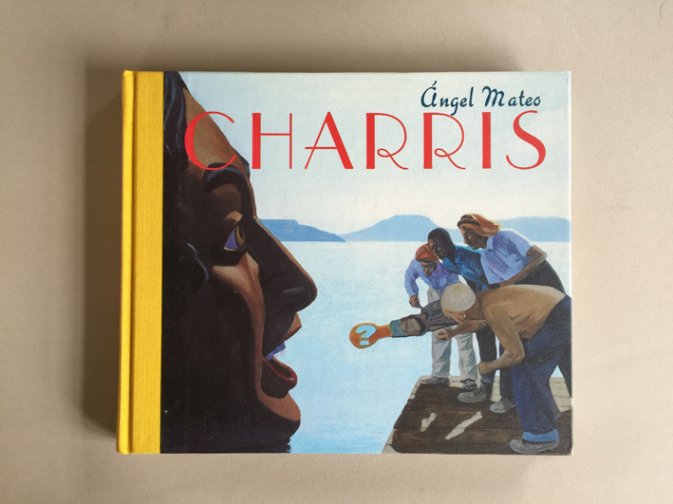 When one approaches the work of Ángel Mateo Charris (Cartagena 1962), one soon realises that this is a world not only original but also truly magical—as personal, in its way, as those created by Miró, Dalí, Chagall, De Chirico or Hopper. Like those modern masters, Charris captures human idiosyncrasies with a merciless, penetrating eye, enticing the unwary spectator to enter and share this singular vision of the world. The present exhibition focuses largely on Charris’s work since the beginning of 1998 when, having resolved questions of style and the most obvious technical problems to his satisfaction, he was able to concentrate on the specific ideas that he wished to communicate in each work. Transforming images taken from popular or more select culture, he continues painting in his representational style, assuming that those who see his work will recognise familiar images and cultural references. A sharp observer of the history of art, Charris has paid tribute to those artists whose work has been especially important for his evolution: Paul Klee, Joaquín Torres-García, Josep Renau and Stuart Davis. His ironic attitude towards the constant changes in tastes in twentieth-century art inspires this monumental parade; a parade that takes a look at the world of art and its rituals. In setting these tributes in Paris and New York he wishes to convey how those two centres have, in turn, dominated and defined the art market of the twentieth century. With powerful metaphorical imagination Charris reinterprets the history of art as a public history show, identifying and paying tribute to the masters of this century, while at the same time keeping his distance and poking fun at their predominance. Charris, who freely combines and manipulates these images in his computer designs, talks to us about the media, about popular culture, politics, the new millennium. His personal and original way of seeing the world may be stimulated by almost anything. Thoroughly Post-Modern yet respectful towards tradition, he is a versatile artist, determined and destined to create his own particular world. And that is precisely what he is doing, aided by his inventiveness, his humour and his candour.